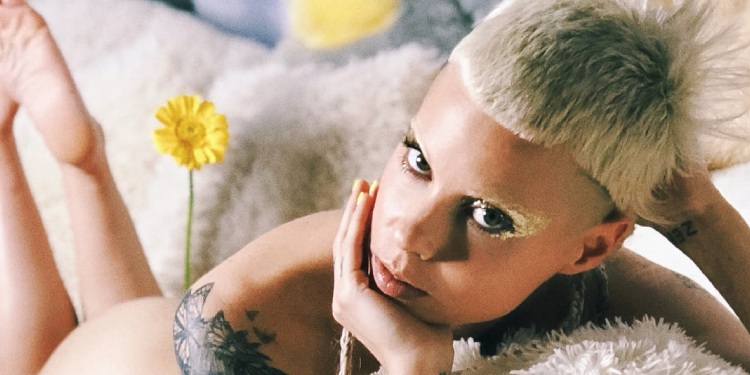 Yolandi Visser is a South African rapper. She is well-known as the vocalist for the South African hip-hop band, Die Antwoord. In addition to this, she was also a member of the South African music band, MaxNormal.TV back in 2008. Apart from her musical career, she has also appeared in numerous movies, including ‘Chappie’ in 2015. Stay tuned to learn more about the musical artist and her life

Yolandi Visser’s actual name is Anri du Toit. She is better known in the industry as ¥o-Landi Vi$$er or simply Yolandi Visser. Furthermore, she is also famous as Anica the Snuffling. She was born on 1 December 1984 in Port Alfred, South Africa. Her actual parents’ names are unknown at the moment as she grew up in an adoptive family. Ben du Toit and his wife adopted her when she was a baby. She grew up alongside her elder adoptive brother, and his name is Leon du Toit. Sadly, he passed away in the year 2015 due to reasons that remain a secret.

Anri has stated that she always felt like she did not belong to the family. She was a troublemaker, and she used to get into fistfights a lot during her teenage years. Because of this reason, her parents sent her away to a boarding school when she was 16 years old. She further stated that the place was nine hours away from their house, but she could find and cherish many artistic and creative people there. Furthermore, she is 36 years old and has the zodiac sign of Sagittarius.

Yolandi Visser holds a South African nationality, and she belongs to the Caucasian ethnicity. In addition to this, she descends from Dutch ancestry. Talking about her religion, she has not mentioned a particular religion. However, many people began questioning their religion, and back in 2013, she said through her Facebook profile that the band ‘Die Antwoord’ were Buddhist Punks. Furthermore, she also stated that they worship whatever they are about to do next. Because of this, her actual religion is a mystery. However, her adoptive family was Christians, and she even studied at a Catholic school. This leads to the assumption that she might also be a Christian, but this remains unverified.

Yolandi Visser stands at the height of 5 feet 2 inches (1.56m/156cm) tall, and she weighs around 53kg (116lbs). In addition to this, she has a slim body figure with a body measurement of 31-20-32 inches respectively. She has an unusual sense of style. She has bleached her hair as well as her eyebrows white. She even asked her ‘Die Antwoord‘ mate Ninja to cut her side hair. Apart from this, she has a pair of beautiful blue eyes color.

Talking about Yolandi Visser’s high schooling years, she studied at Saint Dominic’s Catholic School for Girls. She was a part of the system since she was five years old, and she completed her schooling at 16 years old. For further education, she enrolled at Lady Grey Arts Academy. Upon the completion of her studies, she shifted to Cape Town to begin her professional career.

Yolandi was initially dating her ex-boyfriend, and his name was Markus. He was also a musician, and he likes playing electronic music. The two of them dated for some time, and during this time, she developed more and more interest in music. Sadly, they separated after dating for some time.

Yolandi was then in a romantic relationship with her bandmate, Watkin Tudor Jones, or Ninja. From their relationship, they welcomed a daughter together on 5 January 2005, and her name is Sixteen Jones. Four years after the birth of their child, they parted ways but were on good terms with one another. They continued working together on their music, and eventually, their daughter also gave a debut performance when she was around seven years of age.

As of now, Visser is most probably single and not in a relationship with anyone. However, she adopted three more children into her life. Their names are Tokkie, Meisie, and Jemile.Tokkie and Meisie were adopted in 2010, and Jemile in 2015.

Visser’s first professional work came when she worked with Ninja in 2003. The two of them worked together on a project called The Constructus Corporation, and in 2003, they released their only album, ‘The Ziggurat.’ She then began working as Max Normal’s assistant for the hip-hop group, MaxNormal.TV. It was during this time she adopted the name Yolandi Visser.

The band dedicated their song, ‘Tik Tik Tik’ to her and her early life. It claimed that she was born in poverty to a large family. As a result, she felt lonely and bored and eventually ran away. Likewise, life granted her two options. ‘Option A’ introduced her to a drug dealer with whom she began working and became a meth addict. ‘Option B’ also introduced her to a drug dealer, but she ignored him and chose to work in a café instead. She can rent a room through ‘Option B’ and join MaxNormal.TV through an opportunity.

As of now, Visser is a member of Die Antwoord alongside Ninja. With the band, she has released a total of five studio albums. They are ‘$O$,’ ‘TEN$ION,’ ‘Donker Mag,’ ‘Mount Ninji and Da Nice Time Kid,’ and ‘The House of Zef.’ Apart from her musical career, she has also appeared in numerous movies. In the year 2008, she appeared on ‘Goeie More Zuid Africa.’ Likewise, in 2011, she appeared in ‘Tokoloshe’ and ‘Umshimi Wam.’ Her latest work came in the year 2015. She appeared as herself in the American science-fiction movie ‘Chappie.’

Visser tangled herself in a significant controversy in 2019. The controversy took place when Zheani Sparkes, an Australian musician, released a song called ‘The Question.’ In the song, she explains how Ninja drugged her and trafficked her into Africa. Once she reached there, he took her explicit pictures and sent them back to ‘Chappie.’ She mentions that this was because she resembled her daughter, who was eight years old at that time. Yolandi defended her bandmate, saying that the accusations were false. But Sparkes backfired at her, saying that she assisted her bandmate in the crime. However, all the actions and accusations of this rumor remain unverified.

Another incident took place in the same year, but it was a video that belonged to 2012. It showed Andy Butler, the founder of Hercules and Love Affair, fighting with Jones and Visser. He is gay, and the bandmates were throwing insults at him in the video. However, Butler started the fight, but Jones insisted on her looking as dramatic as possible to avoid getting in trouble. Later, he told her that her performance deserved an Oscar. This video went viral, and Die Antwoord, and Andy Butler lost several festivals where they had an opportunity to present themselves.

Yolandi Visser’s primary source of income is her musical career. She has worked with the band for a long time and has earned herself a tremendous amount of fame and fortune along the way. As of the year 2021, she has an estimated net worth of around $10 million.